We heaved our caps into the air, and hugged our girl friends when they pinned our new Ensign shoulder boards on our white uniforms. Four years at the US Naval Academy were over, and that very day we began spreading out to our future lives.

Many of my classmates jumped into their 1969 Chevy Corvettes, revved the throaty engines, and headed away.

Many of those expensive machines would be sitting in garages on both coasts (at best) while their owners were at sea or in Vietnam. Most had bought their cars using the almost interest-free $3000 loan from Marine Midland Bank, intended to hook the new officers as customers. I took my loan, put it in Annapolis Banking & Trust, where it earned healthy interest, and set up an allotment to pay off the loan. I mainly wanted the BankAmericard (later, Visa) that came with the deal from Marine Midland Bank.

I took $360 from my checking account and bought a 1963 Corvair (yes, the one that Ralph Nader panned). It had no seat belts, but there were anchor points (seat belts were optional back then), so I installed a set myself.

My roommate and best friend, Bill, and I loaded the Corvair with all our earthly belongings, which just filled the small storage space up front, and started south. With its air-cooled engine and upward-pointing fan, the Corvair swam through floods in Fort Wayne, Arkansas, past dozens of stranded trucks and cars. A single fan belt drove all the auxiliaries, so I only needed to keep a spare belt in the glove box. It was easy to replace from the top of the engine. In two days, we reached Bill’s home in San Antonio, Texas, where I met his mother, and toured the town.

… but was this color.

We still had plenty of leave, so we decided to go to Mexico. We stayed in Mexico City for a couple of days. The city sits in the vast caldera of an ancient volcano. The air was oppressive, and the heat was magnified by all the glass, concrete, and asphalt. Acapulco sounded like fun, so we headed southwest. This is when I learned about altitude limitations of internal combustion engines. The owner’s manual explained that driving above 10,000 feet requires a fuel/air adjustment. We were not sure if that was important, but when the car slowed to a crawl trying to climb the rim of the volcano, Bill had to get out and carry two suitcases up the hill by foot. He walked faster than the car. At the top, Bill got back in, and we coasted all the way to Acapulco, always being careful to park pointed downhill.

Acapulco was as beautiful and exotic as advertised, but it started raining the day after we arrived. Again, the Corvair did its amphibious trick, swimming out of the city in a tropical storm. This time, we went around Mexico City to the west.

On the way back, we kept looking for a likely place to camp along the side of the road. Every time we thought something looked good, we chose to go a little farther, and so we found ourselves at the Texas border station in Laredo on the morning of 6 July, not having slept – or washed – all day and night. Hardly the handsome, clean-cut Naval officers who had crossed that border two weeks earlier.

One of the Border Patrol Officers asked for our documents, while the other walked around back. He shined his flashlight in the back window, and shouted to his partner.

“Jeb, one of them is an Aggie!” He had spotted Bill’s sports bag. Bill had been a fish (freshman) at Texas A&M before going to the Naval Academy.

“Out of the car, both of you!” said the first officer. “Wait over there, please.”

While we sat on a bench, the officers proceeded to empty everything from the car. Dogs were brought out to sniff around. We learned that a drug bust at Texas A&M over the 4th of July weekend had turned into a scandal for both the school and the border stations where the marijuana had passed.

Only when they were satisfied that we had no marijuana, did the officers tell us that we could load up and go. Three hours after arriving in Laredo, we were headed for Bill’s house. We drove into his mother’s driveway 23 hours and 59 minutes from when we had left the hotel in Acapulco, and I had driven the entire time. It’s amazing what one can do with a friend for company.

A few days later, I started back to Annapolis (my home of record at the time). By now the Corvair was on its last legs, losing a pint of transmission fluid for every tank of gas. I was not sure it would make it all the way home. It was 106°F in the shade as I pulled into a diner on US 35 in Waco, Texas, and left the car in the noonday sun. After lunch, I started the car, and the back end exploded into flames. The fuel had ignited when it hit the hot nipple on the engine block. Customers poured out of the diner with sugar shakers and covered the flames with sugar. That put out the fire, but left the engine looking like a caramelized blob of black candy.

I went back into the diner and got the Yellow Pages directory from the counter. The first dealer that I called had a big ad and a Navy-friendly name, “Chief Ed”. I told him that I needed to sell the car, because I could not get back to Annapolis on time unless I flew, and a ticket cost $60. Would he give me $60 for the car?

“Did you drive it here?”

I looked up, and saw that all the customers and the serving staff had been watching and listening.

“He bought it?” asked the owner of the diner.

“Yes. Sixty bucks – just what I need to get home.”

The diner erupted into hoots and hollers. I was not sure if I was about to be mobbed or cheered. The owner slapped my back and said, “Son, he’s the biggest crook in town. No one has ever pulled anything like this on him!”

When Chief Ed arrived. I showed him the car and the title in the glove box. I gave him the keys, and took the money, and went into the diner with him. The owner greeted him cheerily and served up some coffee. I excused myself and headed out past the men’s room to the back door. One of the customers was waiting with his pickup truck running and my bag in the back. I was in the air before Chief Ed opened the back of the car to see why it would not start. 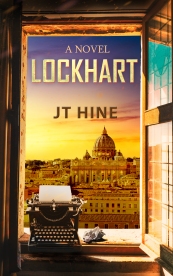 Joe Lockhart can barely remember a time before his mother, Nancy, a drug company executive, brought him to Italy to escape her grief after the death of Joe’s father.

Now, against a background of escalating political violence and Nancy’s concerns for his safety, Joe wants to finish high school before returning to the US. He begins translating confidential company files for his mother and Luke, her colleague. The work seems straightforward and harmless.

While Nancy and Luke are in Germany on business, Joe uncovers a plot to overthrow the Italian government. Soon, he finds himself kidnapped, wanted by the military police, and racing to help head off a coup d’état.

Lockhart is a tale of personal and political conflict, of recovery from grief, and finding new meaning in the idea of home.

Get the print book at Amazon or your favorite retailer. If you are partial to independent bookshops, consider ordering from Bookshop.org and designating your local bookshop to receive a cut. Bookshop.org sells the book at a discount.

You can buy the eBook at Smashwords, Amazon, Barnes & Noble, or your favorite retailer. Each retailer offers a free sample. For the eBook (any format, including Kindle and Nook), use this coupon code at Smashwords for 50% off until the end of May: RN95T. Good for Emily & Hilda, too. Enjoy!