Dark. Absolutely dark. Deep inside USS Little Rock (CLG-4), the lights were all red, so that the night watch could accommodate their eyes. It had been more than four hours since I had seen white light, and I had gone out on deck early to let my night vision become as sharp as possible. It also helped that I knew the location of every knee-knocker and trip hazard by feel and by heart. 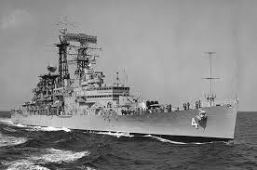 I reported to the bridge at 23:35 and sought out the Officer of the Deck (OOD). As Jerry gave me the run-down on the latest details, my bridge team was doing the same: lookouts, quartermasters, helmsmen, messengers, and status board keepers. The Captain was coming and going between Combat Information Center (CIC or “Combat”) and the bridge. He was always aware of where we were and what we were doing, but he knew that his OOD was driving the ship.

At 23:55, Jerry’s bass voice boomed across the darkness of the bridge.

“This is Lieutenant Hine, I have the deck!”

The watch standers in the dark answered in one voice, “Aye, aye, sir!”

And for the next four hours, I was in charge of 15,000 tons of steel hurtling through the night at top speed. My watch was well-trained. By now, they were used to my insistence that the glowing faces of all display equipment be turned down so low that nothing reflected in the bridge windows. The lookouts on the bridge wings were four stories above the main deck, which was as tall as a two-story house already. During the day, their horizon was more than 10 nautical miles. At night, however, we could see beyond the horizon, taking advantage of the weak loom of ships’ lights caught in the atmosphere of the night sky.

Unless, of course, the ships were running like we were, at “darken ship.” All exterior lights were out, including our green, white, and red running lights required for nighttime safety at sea. Our destroyer escorts were similarly invisible to the untrained naked eye.

So was the “aggressor squadron”, led by the “orange cruiser”, in real life, USS Columbus (CG-12). Two dozen ships maneuvering in the dark, with radars turned off to avoid electronic detection.

This was war at sea, or as close as we ever wanted to get to it during the Cold War. Year after year, the two carrier task groups of the US Sixth Fleet exercised against each other, testing out tactics that the Soviet Mediterranean Squadron might try to use on us if the Cold War went hot. Theory and simulation were nice, but sometimes you simply have to try the ideas out live.

And there was no better way than a war game to develop the precise ship handling needed when the Soviets would periodically show up to play “chicken” with us in our formations. A collision in the Mediterranean was automatically an international incident, and every OOD’s nightmare.

The moon went down as we headed for the last known location of the orange fleet. There was no problem finding the horizon: it was where the brilliant canopy of stars ended. My lookouts and I concentrated our attention on our peripheral vision, which is where most of the available light was going into our eyes. At night, if you look directly at something, it disappears.

The starboard lookout reported phosphorescence about halfway to the horizon. Sure enough, we had found two of the orange ships. The distance was closing quickly, so I slowed and turned to parallel their course. One ship was clearly a destroyer, because all we could see was the occasional phosphorescence in his wake. The other one however, had to be the orange flagship, because even halfway to the horizon, the stars went out as his 12-story tall superstructure passed in front of them.

I confirmed the identification to CIC, and the battle was on. He was definitely at a disadvantage, with his enormous superstructure, because we did not have to sneak electronic peaks at him before launching our weapons.

For the next three hours, the two World War II cruisers danced a deadly ballet as their respective Weapons Divisions simulated launching missiles and gunfire at each other. I took my cue from Combat, maneuvering Little Rock into the best position for her missile launcher back aft or the six-inch guns up forward. Unlike the destroyers on which I had trained earlier, Little Rock was an old-fashioned beauty. Long and lean, she boasted four screws instead of two and could make tighter turns than most ships her size. Columbus was the same type of ship below the main deck, but more top-heavy.

Sometimes, we were no more than 200 yards apart, confidently coming close and turning away as necessary to bring our weapons to bear. I thought about the “chicken” games I might need to play some day, and was grateful for the practice, but it still kept my stomach in a knot all night.

At last, the orange squadron limped away. There would be a wash-up after the exercises to draw lessons learned, but I would not be part of it. At 04:00, I turned over the bridge to my relief, and headed back to the sack for a nap. In three hours, I would be another junior staff officer, cramming the message traffic to prepare his morning briefing for the Admiral. But that’s another story…

(I make no apology for using gendered pronouns in a sea story. In traditional nautical grammar, one’s own ships are feminine, and the enemy’s ships or unidentified vessels are masculine.)

Next week, take an armchair trip through Andalusia with the Freewheeling Freelancer.